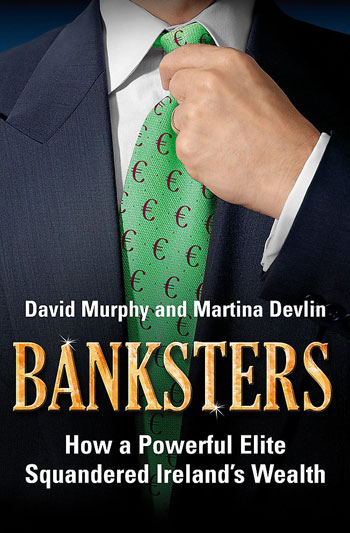 My first co-writing venture produced Banksters, a non-fiction book about Ireland’s banking meltdown. I teamed up with my husband David Murphy, RTÉ’s business editor, to produce the first book charting the fall from grace of senior bankers.

US 1929… On Wall Street, following the worst financial crisis the world had ever seen, the word “Banksters” was coined to describe those ruthless individuals who had gambled away the country’s wealth.

Ireland Today… The phrase “Banksters” is resurrected as David Murphy and Martina Devlin describe the shocking story of how the Irish banking system was brought to its knees by a corrupt elite driven by profit and greed.

As RTÉ’s business editor, David Murphy has been in the front line of the banking crisis daily. A Business Broadcast Journalist of the year, he is a former deputy business editor of the Irish Independent. Martina Devlin is a best-selling author and award-winning journalist writing weekly columns for the Irish Independent. Previously she spent seven years working on Fleet Street. Shortlisted twice for the Irish Book Awards, she was 2009 Writer in Residence at the Princess Grace Library in Monaco.